Railways Recruitment Board (RRB) has officially released the Provisional Panel for RRB Assistant Loco Pilot (ALP) and Technicians on 29th November 2019. Candidates are selected and successfully declared on the RRB Assistant Loco Pilot (ALP) and Technicians Result 2019 based on the performance in the CBT, which happened from 9th August to 31st August 2018, while CBT II happened from 21st January to 23rd January 2019. RRB has also conducted the DV and Aptitude Test for 5744 candidates from 16th June to 23rd August 2019.

RRB Assistant Loco Pilot (ALP) and Technicians Result 2019 are displayed in ascending order, not according to the merit list. Candidates are requested to contact Deputy Chief Personnel Officer, contact number is 9717630620 or may email to dycpor@gmail.com.

If there is any malpractice done by the candidates in their online application form may be rejected by the higher officials of RRB. To know the RRB Assistant Loco Pilot (ALP) and Technicians Result 2019 click the official link provided below.

The RRB ALP CBT 2 Result 2018-2019 announced on 6th April 2019. The RRB ALP Exam was conducted on 21st, 22nd, and 23rd January 2019.The candidates will be able to check their result online at the official website of 21 RRBs. The result RRB ALP CBT 2 is released in 2 forms, merit list, and scorecard. The merit list comprises of roll no. of the candidates who have qualified the exam and are eligible for the next round. Whereas, the scorecard is made available to all the candidates who have appeared for the CBT Stage 2 exam.

had released the ALP CBT 1 result. The Railways RRB Recruitment for Assistant Loco Pilot & Technicians was released a couple months back. A total of 64,371 vacancies are to be filled. The RRB CBT 1 exam was conducted 9th August 2018 to 31st August 2018 in multiple shifts & lakhs of students appeared for the exam & ALP CBT 1 result was thus declared. However, few candidates had represented that there are errors in question/translation. In the wake of this representation, all language translation of all the question papers are being reviewed & the revised result will finally be declared. Read further to know more about  RRB ALP CBT 1 Result  Status & much more. 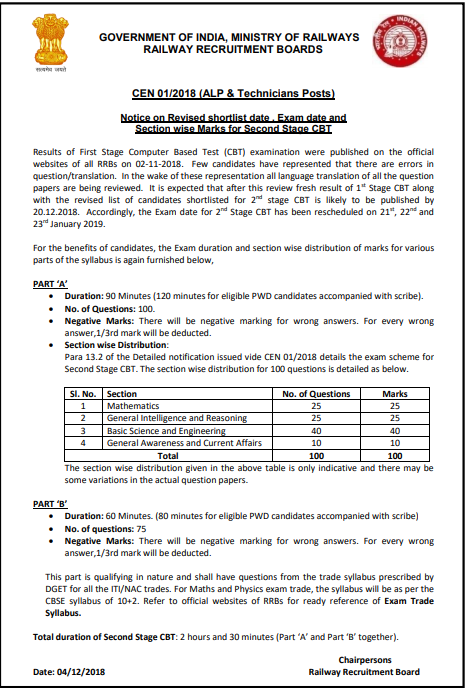 RRB ALP Result 2018: The Railway Recruitment Board (RRB) conducts the RRB ALP exam every year to recruit Assistant Loco Pilots (ALP) across the country. This year, there is opening for 26,502 posts of Assistant Loco Pilot across India. Around 36 lakh candidates have appeared for the 1st Stage CBT this year, which was conducted in August 2018. RRB has released the RRB ALP Result for the 1st Stage CBT on 2nd November 2018. Applicants can download their result from the official website of RRB or the official website of the RRB Region they applied for. The last date to check the RRB ALP Result is 11th December 2018.

RRB ALP Fee Refund declared: RRB has just released an official notification declaring a fee refund to the candidates who had attended the First Stage of the RRB ALP Exam 2018.

Note that the second stage CBT will be conducted from 12th to 14th December 2018. As you know, the 2nd Stage CBT has a test of relevant trade (Industrial Painter, Machinist, Book Binder, Fitter, etc.).

The applicants can check the date for RRB ALP Result announcement 2018 from the table below.

How To Check RRB ALP Result For First Stage CBT

Follow the steps as under to check/download your RRB ALP Result: